Who contributed to the development of electricity and AC power?

Just as it is impossible to pin point one single invention or one single inventor as the eureka moment when the Internet was invented, the same can be said of the development of electricity and AC power distribution. There were many inventors working on various parts which came together. 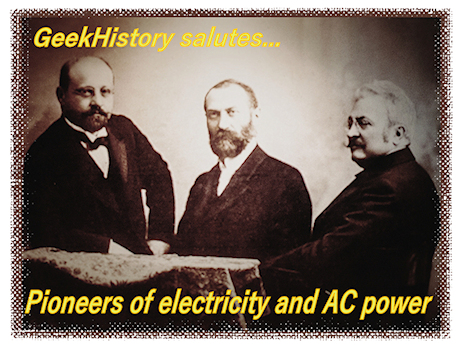 Who contributed more to the development of electricity and AC power distribution?

Are you looking for a single name, like Thomas Edison or Nikola Tesla?  People often talk about the "War of Currents" as the great battle between Edison and Tesla to develop a system for the distribution of electrical current. During the War of Currents, Edison lost control of Edison Electric as it merged with Thomson-Houston Electric Company to form General Electric, and Nikola Tesla was one member of a team of engineers working for Westinghouse Electric. George Westinghouse is every bit as much responsible for our current system of AC power in America, arguably more responsible that Thomas Edison. But the world remembers Edison, much more so than Westinghouse.
Many internet memes spread posters about The War of Currents presenting it as a technology battle between Thomas Edison or Nikola Tesla. Both men were great inventors, but they lived in a time when many people were working in developing the concepts of electric lights and the distribution of electrical current.  What is often not mentioned in the telling of the  "War of Currents" stories is that many of the America inventions were based on the work of various European inventors that were the establishing the ideas and principals that were used by Thomas Edison or Nikola Tesla.

European inventors before Edison and Tesla

Edison did not invent the concept of lighting or the electrical distribution system.  Thomas Edison was influenced by the work of many inventors in Europe were moving forward in the 1870s such as Pavel Yablochkov.
Pavel Yablochkov (1847-1894) was a Russian electrical engineer who invented the  earliest commercially successful arc lamp known as the Yablochkov Candle. During the Paris Exposition of 1878 introduced his lighting system to the world installing 64 of his arc lights along a half mile length of streets. Yablochkov made the installation of electric lighting economically feasible. The intensely bright light created by the arc lamp was great for lighting the outdoors, but it was not practical for indoor use.
Nikola Tesla did not invent the concept of Alternating Current and electric motors. Scientists and inventors such as Michael Faraday and Hippolyte Pixii were working with Alternating Current and electric motors in the early 1800s, years before Tesla was born.
Michael Faraday (1791-1867) British physicist and chemist, demonstrated the first simple electric motor in 1821. Faraday published the results of his experiments of producing an electrical current in a circuit by using only the force of a magnetic field in 1931. Faraday's discovery is known as Faraday’s Law of Electromagnetic Induction.
Hippolyte Pixii (1808–1835), an instrument maker from Paris.  Pixii built an early form of alternating current electrical generator in 1832, based on the principle of magnetic induction discovered by Michael Faraday.

As George Westinghouse began studying the debate surrounding AC (alternating current) versus DC (direct current) he looked to various European inventors for ideas and inspiration for AC designs.
The ZBD Transformer, created in 1878, was based on the work of Ottó Bláthy, Miksa Déri, and Károly Zipernowsky of the Austro-Hungarian Empire. First designed and used the transformer in both experimental, and commercial systems. The Ganz Company uses induction coils in their lighting systems with AC incandescent systems. This is the first appearance and use of the toroidal shaped transformer.  The reliability of AC technology received impetus after an 1886 installation by the Ganz Works that electrified much of Rome, Italy.
A power transformer developed by Lucien Gaulard and John Dixon Gibbs was demonstrated in London in 1881.  In 1884 Lucien Gaulard's transformer system on display at the the first large exposition of AC power in Turin, Italy.The 25 mile long transmission line illuminated arc lights, incandescent lights, and powered a railway.
Westinghouse purchased the American rights to Gaulard and Gibbs patents for AC current transformers. The transformers initially designed for the Westinghouse company were originally based on Gaulard-Gibbs A.C. transformer designs that the company had imported for testing.  Westinghouse and his staff worked on improving and redesigning the transformers, and the Westinghouse Electric Company was started in 1886.
Nikola Tesla patents the final piece
Westinghouse was in a race to be the first company to commercially develop AC power, and George Westinghouse saw that Nikola Tesla's U.S. patents for his AC induction motor and related transformer design were the quickest way to make the final push to win the War of Currents.  Nikola Tesla was also hired for one year to be a consultant at the Westinghouse Electric & Manufacturing Company's Pittsburgh labs.
Some sources say the discoveries and inventions of Nikola Tesla and Galileo Ferraris regarding the invention of induction motor where made entirely independently of each other. Some sources name Galileo Ferraris as the inventor of induction motors based on his research of the rotary magnetic field started in 1885.  Some sources name Nikola Tesla as the inventor of induction motors based on his filling of US patent 381968 on May 1, 1888.
Not taking any chances as to who did it first, Westinghouse also purchased a U.S. patent option on induction motors from  Galileo Ferraris.

Was Nikola Tesla a patent thief?

In the world of the modern Internet Thomas Edison is often called a patent thief who took advantage of the great inventor Nikola Tesla.  Ironically, there is a case to be made that the Polyphase Electric Motor, the invention that made Nikola Tesla famous, was based on a design that Tesla copied from from Italian inventor Galileo Ferraris.
Westinghouse engineer William Stanley stated in a letter to the Electrical Review published in March, 1903, "I myself have seen the original motors, models, and drawings made by Ferraris in 1885, have personally talked with the men who saw these models in operation and heard Ferraris explain them at that date."
Graphic: Ottó Bláthy, Miksa Déri, and Károly Zipernowsky of the Austro-Hungarian Empire designers of the ZBD Transformer, created in 1878.