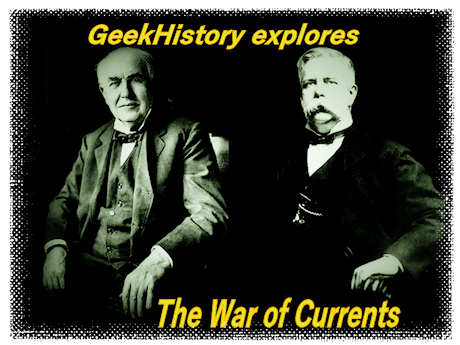 What was the War of Currents?

In the 1890s the War of Currents was a business and technology battle between the Edison Electric Light Company and Westinghouse Electric Company over what electric power transmission system should be used. George Westinghouse and the Westinghouse Electric Company supported AC (alternating current). Thomas Edison and the Edison Electric Light Company supported DC (direct current).
The internet loves to portray the battle as one between rival inventors Thomas Edison and Nikola Tesla.  It makes for a good story of the hero, Tesla, defeating his rival, Edison. Both Thomas Edison and Nikola Tesla were well known in the 1890s and were masters at drawing attention to themselves.  George Westinghouse, unlike his rival Edison, did not seek media attention, and was a very private person.
Thomas Edison was a well known inventor riding his success and media attention for inventing the phonograph. Edison leveraged his name and fame to start building DC power plants in New York City. Nikola Tesla was a genius, and his inventions contributed to AC Power distribution, but Tesla was member of a team put together by George Westinghouse.
The concept of AC power distribution was not a new concept for Westinghouse, he was also an inventor in the gas industry. Westinghouse believed that AC was a better method of power distribution, and believed that electric company founded by his rival Thomas Edison was structurally flawed in its beliefs of using DC power. In 1885 Westinghouse became interested in the inventions of European Inventors Gaulard and Gibbs and purchased the American rights to their patents for AC current transformers. Westinghouse and his staff worked on improving and redesigning the transformers, and the Westinghouse Electric Company was started in 1886.
In 1888 Westinghouse heard of Nikola Tesla and the Tesla Polyphase System. Westinghouse knew that could be the final piece he needed in building a better system than Edison's. Westinghouse purchased Tesla's alternating current patents on the electric systems and paid Tesla to work with him until they were fully implemented.
The battle for public opinion over which system should be used to power America turned into a nasty smear campaign by Edison. An inventor and electrical engineer named Harold Brown became the front man for a campaign to show the world the dangers of alternating current. Stories are told of how Brown paid local children to collect stray dogs off the street that he used for experiments showing the dangers of alternating current. Despite publicly denouncing capital punishment, Edison secretly financed the alternating current electric chair developed by Brown. Edison launched a media campaign telling the world AC was deadly, using the word "Westinghoused" to describe an execution by electrocution.
By the time the War of Currents ended Thomas Edison was no longer in control of Edison Electric. In 1892 Thomas Edison lost control of his own company, as financier J. P. Morgan merged Edison Electric with the Thomson-Houston Electric Company to form General Electric.
George Westinghouse and the Westinghouse Electric Company would have two decisive victories over General Electric, first winning the bid to light the 1893 World's Columbian Exposition in Chicago, followed by the getting the contract for building a two phase AC generating system at Niagara Falls in 1893.
The defeat of Edison in the corporate boardroom by J.P. Morgan followed by two major victories by Tesla and Westinghouse partnership would mark the end of War of Currents.

The history of electricity in homes

The pages that follow show that the battle to illuminate our world was not battle between two sides, but an evolution of ideas and the work of many scientists and inventors.
Even though Americans talk about the War of Currents as the famous battle between Westinghouse and Edison in the 1890s, the world was already moving towards AC power distribution, regardless of who won the American war. The first long distance AC power line was built in 1884 for the International Exhibition of Turin, Italy. In 1885 the first operative AC line for public lighting was put into service in Rome, Italy. In 1891, the first transmission of three-phase alternating current using high voltage took place in Germany.